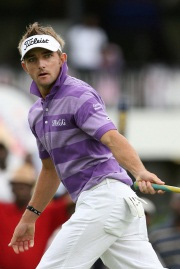 He didn’t know he had a two-shot cushion until he saw the leaderboard behind the 18th green, and it showed Jbe’ Kruger’s final round 65 had given him victory in the Africom Zimbabwe Open.

“I saw a leaderboard at 15,” he said, “and I saw Jaco van Zyl and Andrew Curlewis were on 16-under just behind me, and I thought I’d have to start making birdies.”

He did just that on the 15th and then again on the 524-metre par-five 16th, where he hit the green for two and narrowly missed an eagle putt. But he was safely down for his birdie and, at 19-under, it was all but wrapped up.

Van Zyl moved to 17-under with a birdie on 17 and eventually finished second, two shots off the pace. He, too, had a final round of seven-under-par 65.

Curlewis, however, had an agonising three-putt on the 18th green for double bogey – his par putt and his bogey putt lipped out – and that saw him drop down the leaderboard to a share of fourth with Trevor Fisher Jnr and Anthony Michael at 15-under.

Fisher closed with a five-under-par 67, and, for the first time during the tournament, his card didn’t have a double bogey (or two) on it.

The rookie Michael had led through halfway at 15-under, and into the final round on the same score. He closed with a second successive even-par 72 to conclude a good tournament.

In third place was Zimbabwean Marc Cayeux, who put in a valiant effort at taking his home open championship to finish at 16-under.

His opening bogey didn’t help matters, and he simply could not reproduce the kind of golf which saw him make eight-under 64 in his first round.

Kruger’s win was all the more remarkable because he has been tinkering with his grip, and he claimed that it still wasn’t right.

“It held together on the front nine, and I wasn’t hitting the ball 30 yards left like I was during the early rounds,” he said. “But it started to get a little shaky on the back nine.”

With an eagle and three birdies on the back nine, that was kind of hard to believe. “It was my putting that did it,” he said. “And the greens here were so good that I was in a position to make some of those putts. I was able to see the line and then start it on the line most of the time. Putting was the difference.”

The 23-year-old champion played the round with Ulrich van den Berg, a relative veteran of 35, playing in his 209th tournament on the Sunshine Tour.

“I have never seen a professional close out a victory as well as that,” he said to Kruger as the pair exited the scorers’ tent.

The victory gives Kruger the second Southern African title of his career – he won the Zambia Open last year.

“I love Africa,” he laughed