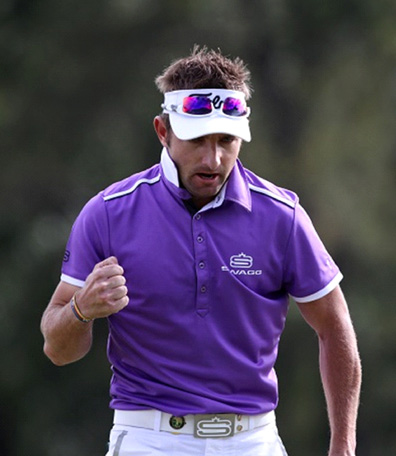 Jbe’ Kruger hit what he called a perfect shot on the 17th at Royal Harare Golf Club on Sunday to set up a tense one-stroke victory in the Golden Pilsener Zimbabwe Open.

It brought him his second successive birdie after his breath-taking charge for victory had been temporarily halted by a pair of bogey on the back nine, but that birdie took him clear of Jacques Blaauw and gave him his second title in the Zimbabwean capital after he won there in 2010.

“I didn’t like that 17th hole the whole week,” said Kruger, who made two bogeys and a par on it in the preceding three rounds – “so I knew it was the hole that was going to make or break the tournament for me, and I just hit an absolutely perfect shot and I made the putt.”

But there was still work to be done after his drive on 18 hit trees on the right and left him with very little chance of making the green in two. Instead, he aimed for the front left bunker protecting that green.

“I grew up on a sand golf course,” said Kruger, “so put me in a bunker and I’m happy. I didn’t hit a great trap shot, but it was good enough.”

He made par there, and when Blaauw, who had eagled 16 to bring himself into the equation after a frustrating day, made par on 17, missed his birdie attempt on 17, it was going to take a birdie on the tough 18th by the big Centurion player to draw level with Kruger and force a play-off.

Blaauw (right) came agonisingly close with his birdie putt, but, in the end, his final-round 68 fell two shot short of victory – and he’ll look ruefully back at bogeys on the third and the sixth – both par-fives.

For Kruger, his final round 66 brought to a conclusion a helter-skelter chase of third-round leader Haydn Porteous, who gritted his way to a one-over 73 for third.

“I actually started the day thinking it was almost only a miracle that could get me the win, because I was five back,” said Kruger. “I knew I had to shoot low. But I didn’t think I was going to come out guns blazing like that.”

And, extraordinarily, he soon raced to five-under, even though, by his own admission, he wasn’t putting that well. “As I was walking down eight, I was saying to my caddie that I missed five putts inside 10 feet, but I was five-under-par.

“But I felt from the start that I could pull this off. I know about final rounds – I’ve been in them many times. It’s probably the most difficult. You have to make putts and you have to hit it well. The guys around me were playing well, but they don’t have that experience, and if things don’t go their way, there’s almost too much pressure,” said Kruger.

For all the pyrotechnics in his round, his 66 wasn’t the best of the day. Jaco Ahlers came roaring through the field with a bogey-free seven-under-par 65 to claim fourth after starting the round in a share of 14th.   In the end, that Kruger birdie on 17th was pivotal. “When I made that putt, I knew that the others were really going to have to chase hard,” he said.

This entry was posted in Articles by Mike Green. Bookmark the permalink.