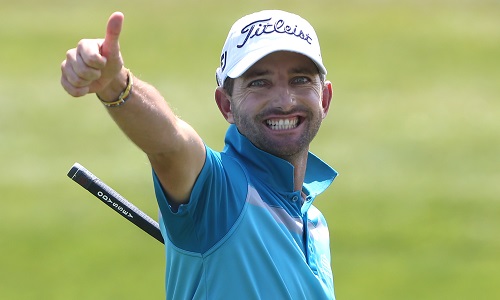 Jbe’ Kruger goes into the Tour Championship at Serengeti Estates which tees off on Thursday with the memory of a tournament-winning shot fresh in his mind.

Kruger is one of 42 players from the top 50 of the Sunshine Tour Order of Merit who will be battling it out over 72 holes for the winner’s share of the R1.5-million purse, and he knows that he sealed the deal last time he played a tournament on his home course.

“I remember the shot I played to win here last year quite clearly,” he said. “It was just one of those where you’ve got the perfect club for the perfect distance, and I’ve hit that shot a million times around here.”

He hit a nine-iron approach shot on 18 from 162 meters to within two feet of the flag to make birdie and win the Sun Carnival City Challenge by a single shot from Neil Schietekat and JJ Senekal, both of whom are in this week’s field.

“On the last hole, I knew I had to make the birdie,” Kruger said of that approach shot on 18. “I hit my best shot of the day, it came out perfectly. My approach game has been a strength throughout my career, and that’s why I think I’ve been successful here.”

He will be up against a strong field, as is inevitably the case when it is made up of players who have had to qualify to get into the tournament. Chief amongst his opposition will be the likes of JC Ritchie, Ockie Strydom and Oliver Bekker, the three highest-placed players on the Order of Merit. A win for any of those three would be a fitting coda to their fine seasons.

Then there is someone like Hennie Otto, the 2011 SA Open champion on the Serengeti course. He has emerged from a long period of recovery from injury, and, on his day, is capable of going very low.

Besides Kruger, there are 13 other players who won during the 2017-18 Sunshine Tour season, which indicates just how strong the field is, and just what odds Kruger will have to overcome should he win the tournament.

His home-course advantage, however, makes him a tough nut to crack. “It’s exciting that it’s hosted by my home course,” he said. “Everything about your game has to be on here. When Jack Nicklaus designed this place, he made sure all aspects of your game would be tested. The fairways are actually quite generous, but with the greens being so undulating, you have to hit the right club.

“I’ll approach it one shot at a time, even though it’s my home course. Everyone’s expecting me to play well. My game’s not been great lately. It’s probably been my worst start to a year in 11 years as a professional.

“I didn’t play well before I won here last year, just like now. But that week specifically, I hit it well. I drove it well, and if you drive it well, you make this course a lot shorter. Because I know the place so well, I’m playing in a comfort zone.”