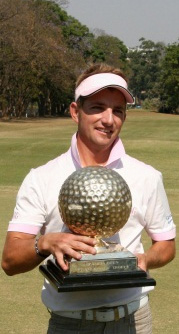 The Zambia Open takes place for the 13th time on the Sunshine Tour roster since 1996 and it returns to the Ndola Golf Club for the second consecutive year.

Last year, Jbé Kruger claimed his maiden Sunshine Tour in spectacular form by firing a birdie on the last hole to seal the victory by three shots from a rampant Titch Moore.

Kruger will defend his title this year, and will be full of confidence after winning the Zimbabwe Open earlier April and returning from a successful few weeks on the Asian Tour.

The Zambia Open has in fact been running since 1972 when it was part of the Safari Tour and includes many famous winners such as Ian Woosnam and Sam Torrance. It was also co-sanctioned by the European Challenge Tour between 1991 and 1993, and again from 2001 to 2004.

The tournament was originally hosted at Lusaka Golf Club from 1996 onwards, but was forced to move in 2006 after a sponsor dispute. The 54-hole tournament will feature a field of 156 players with 30 of those being invites to African players across the continent.